Get FREE E-book when you subscribe to Eats With Mish today! 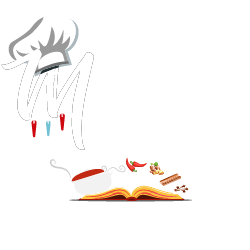 If you ask a North Indian about their perfect comfortable lunch, they will most likely reply with one word -Rajma. For the uninitiated, rajma refers to red kidney beans. It’s one of those times when the name of the ingredient is synonymous with the dish itself. It is a popular North Indian Vegetarian dish made with red kidney beans in a thick gravy made with whole Indian spices. It is usually served with a side of rice, and Indian flatbread like roti or poori. This nutritious delicacy is sure to keep you content, in your stomach, and in your taste buds.

What is Rajma Curry?

Rajma is prepared by soaking red kidney beans in water overnight before they get boiled in a pressure cooker. The boiled beans are added to a curry which is generally cooked beforehand which creates the final dish. Red kidney beans are an excellent source of Vitamin B6, Folic acid, dietary fibers, and protein. They are very nutritious. However, kidney beans are harder to digest than other beans. This is why they are usually boiled and traditionally cooked with seasoning that helps break them down.

Notable Ingredients at a Glance

Rajma – There are numerous varieties of rajma available at Indian grocery stores. They come in a variety of sizes and colors. You can use whatever type you can find. Keep in mind that the time it takes to boil rajma will vary depending on which one you use.

I personally prefer rajma which is dark in hue. They retain their shape after cooking and absorb flavors well.

Onion –  Use 1 medium-sized onion that is roughly chopped. No need to make the pieces indistinguishably small as we are going to blend them anyway.

Tomato – In Indian cookery, tomatoes are a must. Use tomatoes that are not overly ripe. Roughly chop or dice the tomatoes for this recipe.

Ginger-Garlic paste – Use fresh ginger and garlic paste, either grated with a Microplane zester or crushed in a damp jar of my spice grinder. However, you can substitute ready-made or homemade ginger garlic paste.

Cinnamon stick – A 1-inch stick will be enough for the curry. You can substitute with cinnamon powder in a pinch even though a whole cinnamon stick is a way to go.

Spices – All of the spices used in this recipe are common in Indian cookery.

Dry mango powder – This is a special tangy powder made from dried mangoes. You can skip it if you cannot find it in your area. Citric acid could be a close standardized substitute to add the tartness that amchur powder brings.

Ghee – Instead of oil I have used ghee in this recipe. Use oil if you are vegan.

How to prepare Rajma Curry?

We will start the night before the dish is actually prepared. Soak the Rajma in three cups of water overnight.

After at least 8 hours or overnight, throw away the water and wash the beans under running water in a colander.

Meanwhile, in a blender, add the onions, tomatoes, garlic, and ginger, And blend them into a fine paste.

In a pan, heat the oil and add your cinnamon stick. Once the oil is fragrant and shimmering, add your onion-tomato paste and saute it for 2 minutes.

To this, we will add coriander powder, chili powder, and garam masala. Fry the masala on low heat until the oil starts separating out. The pressure cooker must have released its pressure by now. Open the cooker and add the masala into the cooker and give it a good mix.

Adjust the salt and water consistency to taste. Close the pressure cooker and cook until it whistles once. Lower the flame and cook for another 2 to 3 minutes.

Finishing off, turn off the gas and once the pressure releases, open the cooker and add your amchur powder and garnish with freshly chopped coriander.

Rajma Curry (Red Kidney Beans Curry) is a popular North Indian dish that I love. There are many ways of making this and this is how I make it 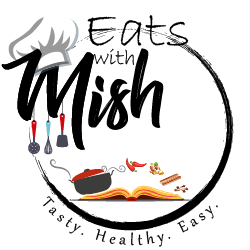 Hello! So glad you stopped by!
At Eats with Mish you will find delicious, healthy recipes broken down into simple steps. You’ll also notice that a lot of my dishes comprised of few simple and wholesome ingredients. I’m really excited to bring you the joys of Indian cooking the simple way!

This website uses cookies to improve your experience while you navigate through the website. Out of these, the cookies that are categorized as necessary are stored on your browser as they are essential for the working of basic functionalities of the website. We also use third-party cookies that help us analyze and understand how you use this website. These cookies will be stored in your browser only with your consent. You also have the option to opt-out of these cookies. But opting out of some of these cookies may affect your browsing experience.
Necessary Always Enabled
Necessary cookies are absolutely essential for the website to function properly. This category only includes cookies that ensures basic functionalities and security features of the website. These cookies do not store any personal information.
Non-necessary
Any cookies that may not be particularly necessary for the website to function and is used specifically to collect user personal data via analytics, ads, other embedded contents are termed as non-necessary cookies. It is mandatory to procure user consent prior to running these cookies on your website.
SAVE & ACCEPT